Established in 1980, the Food Bank is a nonprofit organization that has provided food for people at risk of hunger in 34 counties for over 35 years. The Food Bank serves a network of more than 800 partner agencies such as soup kitchens, food pantries, shelters, and programs for children and adults through distribution centers in Durham, Greenville, New Bern, Raleigh, the Sandhills (Southern Pines) and Wilmington.

Sadly, food insecurity remains a serious problem in central and eastern North Carolina. In these counties, more than nearly 605,000 people struggle to access nutritious and adequate amounts of food necessary for a healthy life.

Salvation Army of the Carolinas

An Army of more than 1,000 Salvation Army officers, employees, and volunteers working to feed, hydrate, and give hope to people impacted by Hurricane Florence

The impacts from Florence continue to unfold across the Carolinas as catastrophic river flooding remains the concern this week into next. Some rivers are expected to remain in major flood stage well into next week. The Salvation Army is on the ground, serving people in communities impacted by Hurricane Florence.

On the ground reports from some of the Salvation Army service areas:

The Salvation Army continues to provide food, hydration , emotional and spirit care to the hurt, hungry and hopeless of the five counties; Columbus, Bladen, Pender, Brunswick and New Hanover. Presently we have 7 Rapid Response Units and 6 canteens handling this mass feeding production. Slowly power is being turned on in Wilmington proper but the outlying regions are continuing to suffer without power and water. At some of our feeding sites we are having to use four wheelers to bring food to a large population of elderly citizens whose road has been totally washed out.

As power is restored in more communities in Hyde and Beaufort Counties, the mobile feeding units are consolidating service at the Chocowinity fire department and Aurora, NC. We will not serve in Belhaven or Scranton. We expect to distribute ice and cases of water as the need arises. We are transferring the USDA food we received last week to the Baptist Kitchen, as they continue to cook meals. Local church groups are insisting in moving that food from the Corps to the kitchen. Neighbors can also pick up meals at the kitchen location at the 2nd Baptist Church in Washington.

The Salvation Army continues to fan out across Carteret County, providing meals, water and emotional and spiritual care for those still feeling the effects of Hurricane Florence. Power is yet to be restored to more than half of the county. The Salvation Army continues to serve at the Newport evacuation shelter at Newport Middle School, and has also fed residents in the towns of Morehead City, Beaufort and Davis. Most residents echo the strength and resiliency of Morehead City resident Amanda Buck: “We’re struggling, but we’re making it. We are just so glad to be alive. We are sticking in there.” Attention is starting to turn to more remote areas of the county, as power starts turning back on the population centers.

The Disaster Assistance Improvement Program’s (DAIP) mission is to provide disaster survivors with information, support, services, and a means to access and apply for disaster assistance through joint data-sharing efforts between federal, tribal, state, local, and private sector partners.

On August 29, 2006, President George W. Bush issued Executive Order 13411. DAIP was created in response to this order. Our goal is to improve survivor access to disaster information and make applying for disaster assistance easier. The Federal Emergency Management Agency (FEMA), under the Department of Homeland Security (DHS), acts as the managing partner.

On December 31, 2008, DAIP launched a website called DisasterAssistance.gov. The site allows you to:

The site can also help you learn how to prepare for, respond to, and recover from disasters. You can learn to deal with immediate needs, like how to:

You can even read the latest disaster news feeds and find other recovery help to help you move forward.

DAIP is an E-Government program. Through DisasterAssistance.gov, we can help the government provide you with Internet-based technologies that can:

If approved for D-SNAP benefits, you will get an Electronic Benefits Transfer (EBT) card to access them. You use it just like a debit card to buy food at most local grocery stores.

Because of the unique needs of disaster survivors, D-SNAP uses different standards than normal SNAP. If you would not normally qualify for SNAP, you may qualify for D-SNAP if you had one of the disaster-related expenses below:

If you’re a current SNAP client, you can request a supplement when your state operates a D-SNAP if you meet the conditions below:

The supplement brings your benefits up to the maximum for your household size. This way benefits are equal between D-SNAP and SNAP households after a disaster.

Current SNAP clients may also request replacement benefits for food that was lost in the disaster and bought with SNAP benefits. Just contact your local office.

The purpose of Disaster Unemployment Assistance (DUA) is to provide unemployment benefits and re-employment services to individuals who have become unemployed as a result of a major disaster and who are not eligible for regular State unemployment insurance. This fact sheet outlines general information pertaining to the requirements and conditions under which an individual may be eligible for DUA.

The federal government is responding to the impacts of Hurricane Florence. Continue to follow direction from state and local officials. If you were affected, start the recovery process once it’s safe to do so.

The federal government is responding to the impacts of Hurricane Florence. Continue to follow direction from state and local officials. If you were affected, start the recovery process once it’s safe to do so.

PDF of Map Google Earth Need help with this map?

For information on how to plan and prepare for emergencies and stay informed, go to ReadyNC.org or download the free ReadyNC app, which has real-time weather, traffic and shelter information.

USDA offers a variety of programs and services to help communities, farmers, ranchers, and businesses that have been hard hit by Hurricanes Irma, Harvey, Maria and other natural disaster events. To find out how USDA can further assist you, visit USDA’s Storm Disaster Page.

The Agricultural Act of 2014 indefinitely extended the following four disaster programs that were previously authorized by the 2008 Farm Bill. The programs are made retroactive to Oct. 1, 2011. To be eligible for disaster assistance programs under the 2014 Farm Bill, producers are no longer required to purchase crop insurance or NAP coverage, which was the risk management purchase mandate under the 2008 Farm Bill.

Livestock Forage Program (LFP): LFP provides compensation to eligible livestock producers that have suffered grazing losses due to drought or fire on land that is native or improved pastureland with permanent vegetative cover or that is planted specifically for grazing.  Learn more about LFP.

Livestock Indemnity Program (LIP): LIP provides benefits to livestock producers for livestock deaths in excess of normal mortality caused by adverse weather or by attacks by animals reintroduced into the wild by the federal government.  Learn more about LIP.

Emergency Assistance for Livestock, Honeybees, and Farm-Raised Fish (ELAP):ELAP provides emergency assistance to eligible producers of livestock, honeybees and farm-raised fish for losses due to disease (including cattle tick fever), adverse weather, or other conditions, such as blizzards and wildfires, not covered by LFP and LIP.  Learn more about ELAP.

2017 Wildfires and Hurricanes Indemnity Program (2017 WHIP): 2017 WHIP provides disaster payments to agricultural producers to offset losses from hurricanes, such as Harvey, Irma, Maria and Nate, as well as devastating wildfires during 2017. Learn more about 2017 WHIP.

The Emergency Loan Program provides loans to help producers recover from production and physical losses due to drought, flooding, other natural disasters, or quarantine. Emergency loan data by state and fiscal year is provided here.

The Disaster Set-Aside Program provides producers who have existing direct loans with FSA who are unable to make the scheduled payments to move up to one full year’s payment to the end of the loan. Disaster set-aside data by state and fiscal year is provided here. Assistance is available in counties, or contiguous counties, who have been designated as emergencies by the President, Secretary or FSA Administrator.

The Emergency Conservation Program (ECP) provides assistance to producers if their land was damaged by a natural disaster and needs conservation practices.

Maybe we can help. Please check our Online Knowledge Base. AskFSA

For information on how to plan and prepare for emergencies and stay informed, go to ReadyNC.org or download the free ReadyNC app, which has real-time weather, traffic and shelter information.

Due to flooding motorists should not travel in areas south of US-264 and east of I-73/I-74.

At this time no safe, stable or reliable route exists for the public to get to and from Wilmington.

Although water is receding on some roads, the roads and bridges may be damaged and the road closures are still in effect. Signage should be adhered to.
There are many others in which the flood levels will continue to rise over the next 72 hours or more depending on the river.

Many areas affected by the storm only have a few passable roads in and out. These routes are vital for recovery efforts – excess traffic, and stalled or wrecked vehicles can become a major hindrance to recovery efforts.  Law enforcement, fire, EMS, National Guard, utility companies, and others that must have access to the hardest-hit areas of the State.
Many of the essentials, such as food, water, and fuel are limited in these areas.  Adding additional people in these areas will further strain these resources.

GPS systems are routing users into areas NCDOT is not recommending for travel.

For weather updates visit the National Weather Service  / For the latest on hurricane response visit ReadyNC.org

As Hurricane Florence starts to move out of North Carolina and the recovery begins, please remember to remain cautious and careful by using these tips.

In recent years hurricanes, tornados, and other natural disasters have inflicted enormous suffering and property damage across many parts of North Carolina. The State Historic Preservation Office offers the following information sheets to assist historic property owners in recovering from a natural disaster.

New: The Importance of Planning for Disaster and Recovery: Lessons Learned from Irene (PDF). A paper by Reid Thomas, Restoration Specialist with the Eastern Office of Archives and History, presented to the Connecting to Collections Workshop, Hatteras, NC, February 6, 2012. 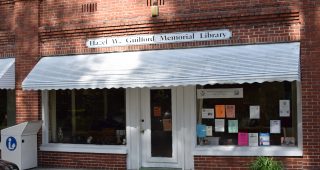 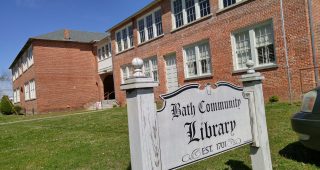 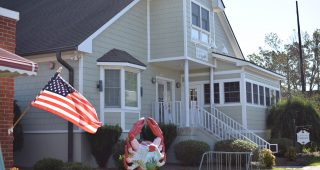 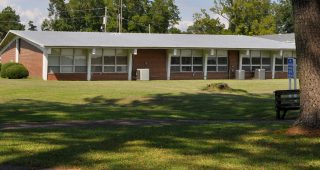 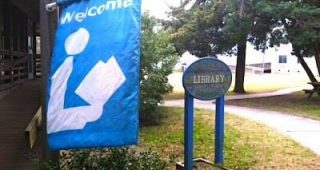 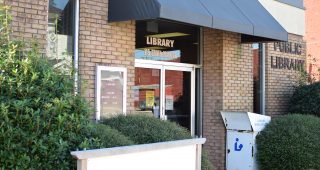 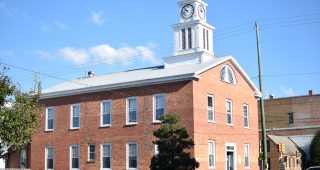